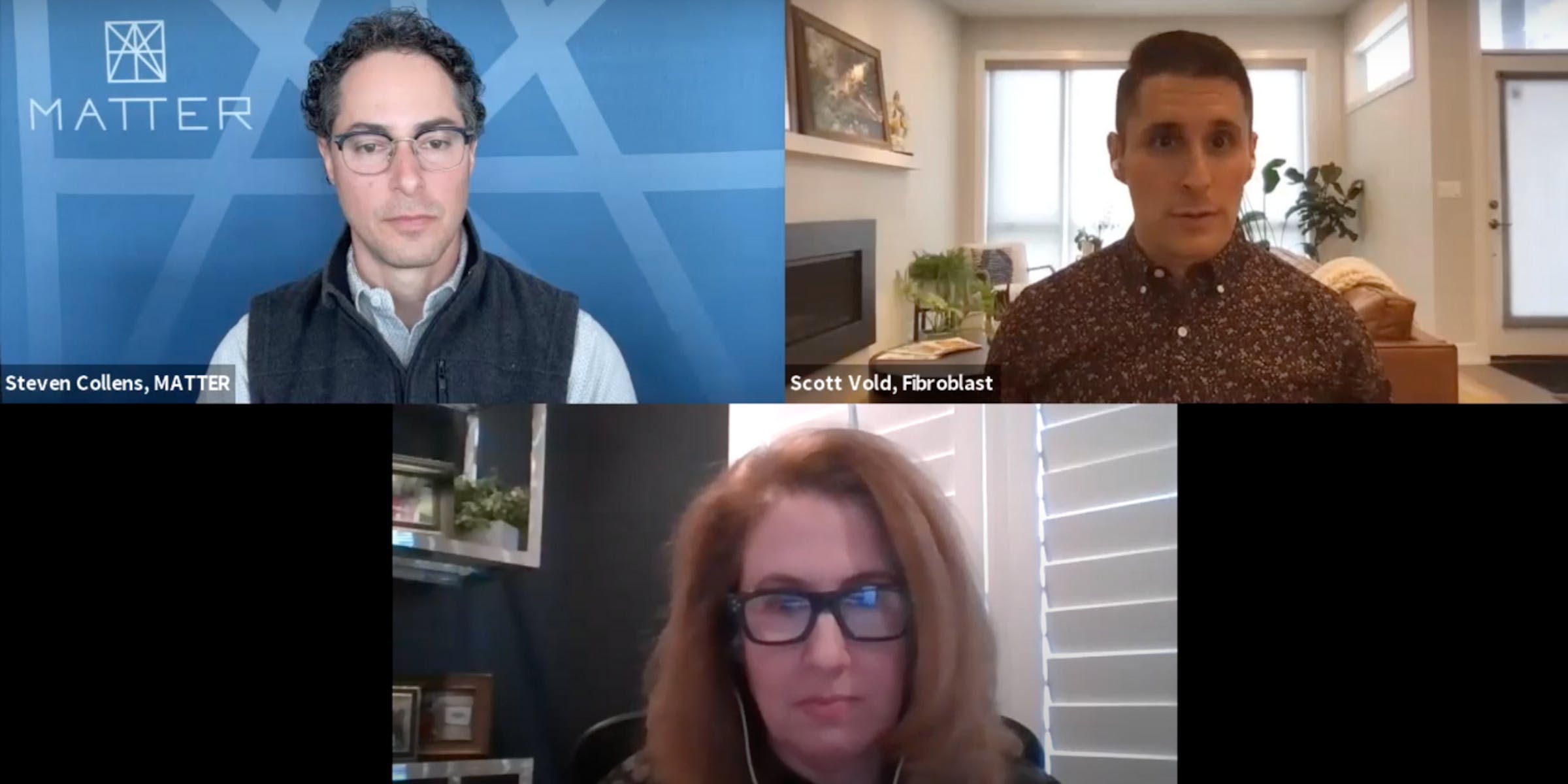 In 2010, Scott Vold was an attorney working 80 hour weeks, on the path to partnership — and completely miserable.

With no positive outlook on how that could change working in law, he decided to take the plunge into entrepreneurship in one of the riskiest industries for startups: healthcare. Fast forward ten years, and Scott’s digital health startup Fibroblast is not only a success, but was recently acquired by EMR giant Cerner Corporation.

Last month, Scott joined MATTER CEO Steven Collens and Cerner senior vice president of health network Kim Hlobik at a virtual event to discuss the MATTER startup’s road to acquisition. We recapped Scott’s story and what led him to work with Cerner below.

As someone with no experience in healthcare, Scott knew that if he was going to build a startup in that industry, he needed to get feedback from a doctor. So in 2010, he called his physician friend, Andrew Albert, to share a business idea he had.

“I started to launch into this pitch and it was really clear that he was distracted by something,” Scott recalled about his conversation with Andrew. “I finally stopped myself and asked what was going on, and he told me a story that really became the catalyst for the business.”

Andrew had just heard a story that was weighing on his mind. His colleague — a primary care physician — had noticed some concerning cells and microscopic blood in the urine of one of his patients during a physical more than a year ago. While there were no other symptoms, he referred the patient to a urologist and urged him to make an appointment soon and report back the findings.

To both Scott and Andrew this story was horrifying because it was all too common. To Scott, it brought to mind the referrals he wasn’t following up on and the care he pushed back week after week with his busy schedule. To Andrew, this story hit too close to home. He had no way of tracking the referrals he made to his patients and worried about the same thing happening in his practice.

Scott scrapped his original idea and partnered with Andrew to try to solve the broken patient-referral process. They learned about the startup world, talked to VC’s and eventually found a developer to help create a platform that allows providers to build and manage referral networks. But according to Scott, the real validation for them to go all-in was when their startup, Fibroblast, got into Techstars Chicago.

“I went home to tell my wife that we were going to be poor for a while,” Scott said. He took the plunge and left the law, knowing that meant late nights, a lot of mac and cheese and the end of financial stability.

Luckily, the risk paid off and by 2020, Fibroblast was acquired.

The path to acquisition

By fall of 2019, Fibroblast was still in startup mode. They had a strong product, were steadily landing new deals and had solid financials — but they were still burning cash. Scott and his team decided that in 2020, they were going to raise another round of funding while at the same time exploring options for acquisition.

“An acquisition was always the end goal for the company,” said Scott. “As important as referral management is, we knew that… we ultimately needed to be part of a much larger platform. One that lays on top of one or more EMRs, that connects various networks together and provides some sort of data liquidity. We just didn’t have capital structure to do that on our own.”

Fibroblast received some great offers from different companies, and it became evident that acquisition was the way to go. However, they were not only looking for a larger company to scale with, but a team that they believed in, and that believed in them.

“Being a mission-driven company around the transformation of healthcare, we believe in stories,” said Kim when describing how she knew Scott and his team were a good match for them. “When we met Scott and he shared the reason that he [built Fibroblast], we could see the heart and soul in his company… to do good and to make healthcare better.”

“When we met Scott and he shared the reason that he [built Fibroblast], we could see the heart and soul in his company… to do good and to make healthcare better.”

As part of Cerner’s acquisition, Scott and his team merged with theirs. Scott now leads the referral management team at Cerner and works under Kim to grow Fibroblast’s platform.

“I don’t have to worry about making payroll or figuring out our benefits plan,” said Scott about his new role, “So all of the kind of annoying parts of running a business are out of the way… But [Kim] lets us run the business the way we need to run the business.”

According to Kim, who said she has watched at arms length when other startups were acquired but transitioned to a larger team unsuccessfully, part of successfully working with Fibroblast is keeping Scott’s team and leadership intact.

“We brought [Fibroblast] all over under Scott,” she shared. “We want to continue to grow their team…and make decisions together.”