MATTER is closed to visitors and guests — but there are still ways to stay engaged. Click to learn more.

This is Mike Abbadessa, senior director of medical affairs at Takeda Pharmaceuticals. 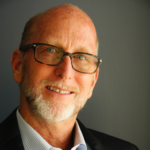 And this is Jason Smith, technology executive and computer scientist turned healthcare entrepreneur. He and Dr. Lev Becker founded the startup, rMark Bio, in 2015. 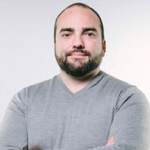 In early 2015, Mike’s team at Takeda was looking to identify Key Opinion Leaders (KOLs) by identifying patterns in practice. KOLs are influencers in the biochemical and pharmaceutical industries. Often KOLs are biochemical researchers who study chemical and biological interactions, and as such are often the first to know about potentially helpful or harmful interactions between chemicals.

Pharmaceutical companies consult with KOLs to ensure that the therapies they create are being used safely and are producing expected outcomes in patients. Additionally, these consultations keep the pharmaceutical company on the leading edge of new or emerging thinking about how to treat patients, as KOL’s typically operate on the frontiers.

Over the past 5 years Takeda used ready-to-use technologies to identify primarily clinical KOLs, but the results were discouraging, as these products weren’t customized to Takeda’s needs and their outputs weren’t specific enough to truly answer the company’s questions. Mike and his technology team worked to combat this lack of specificity by conducting an experiment (in collaboration with the Takeda Digital Accelerator team) with an established large-company / corporate consulting vendor to develop machine learning processes. Although the pilot provided some insights into the use of artificial intelligence (AI) for discerning specific KOL segments, the capabilities of the supplier were not the perfect fit at the time.

In 2016, Takeda, through the Takeda Digital Accelerator team, nominated Mike to spend his Fridays at MATTER as a Living Lab fellow, a program designed to encourage collaboration on common healthcare challenges between innovators within MATTER’s healthcare industry partner organizations and member startup companies.

Jason, meanwhile, was working to identify which academic researchers were studying conditions and subject matter relevant to the development of new drugs, hoping to license his product to pharmaceutical companies looking for the latest in R&D. To help this process his team was developing a deep learning platform, allowing rMark Bio to learn and adapt to what recommendations are most helpful to its users.

But while his product was promising, Jason was struggling, too. He was having trouble connecting with the pharmaceutical executives who would eventually use his product, and he ultimately didn’t know if he was building something that pharma companies would actually pay for.

At this point, MATTER VP of Programs Maryam Saleh recognized the potential synergies between Mike and Jason’s projects and introduced the two. The collaboration made sense on paper: Jason would get the feedback he needed, while Mike had a potential solution to the problem he’d been looking to solve.

But Mike’s problem wasn’t exactly the one Jason was solving. He needed to identify integrated delivery network and accountable care organization “KOLs,” not the academics that rMark Bio was working on identifying. After a few initial meetings, Mike realized rMark Bio’s potential for filling the gap identified from the previous experiment. Mike then pitched Jason on a big pivot: if rMark Bio could extend their platform and algorithms to identify KOLs that meet changing criteria for engagement with the Medical Affairs department, Takeda may be interested in licensing it.

It was a much broader scope than Jason and Lev had initially planned for their minimum viable product, however, they recognized that a decision-maker at one of the largest pharma companies in the world was telling them explicitly how to work with them.

So they went for it.

Because both individuals were active at MATTER, they could meet regularly. Jason learned a great deal from these meetings as he got an inside view into Takeda’s operations, previous attempts to solve the clinical KOL problem, and their decision-making process. He worked with Mike to get his product audited and accepted by Takeda’s IT. Further, he learned how to navigate the legal and procurement processes of a large pharmaceutical company.

For his part, Mike could provide insights to customize portions of rMark Bio’s identification and recommendation platform to ensure they met Takeda’s dynamic needs up front, rather than trying to force ready-to-use products into an awkward fit or struggling to wade through tons of raw data output from machine learning algorithms.

Takeda essentially had the best of both worlds: the customization and computing power of machine learning with the user interface and ease of use of ready-to-use solutions.

Today, rMark Bio and Takeda have a pilot agreement, under which rMark Bio will deploy its app to help about 20 Takeda employees identify clinical KOLs. Mike and Jason hope to continue the partnership after the pilot, and Takeda plans to be the first enterprise to license rMark Bio with the potential for 60 Takeda employees to use the technology, and perhaps even more, across the globe.

Both parties came away from the collaboration significantly better than before they decided to work together. Takeda essentially got a product that immediately solves an existing problem, without any up-front research and development cost. rMark Bio, meanwhile, got a product roadmap from a big company, immediately bordered their future opportunities for companies with similar challenges, received a potential customer, and gained a strong understanding of the buying and audit processes at big pharma companies.

The two learned how to “speak each other’s language” as well. Jason knows how to communicate his value proposition in a way big pharma would accept. And Mike learned to appreciate the startup “language” with which Jason communicates, embracing the genuine and open communication style that rules the startup world. Freely sharing ideas and criticisms, as he and Jason do, is a tenet of true innovation, while corporate culture tends to favor abstraction of language and obfuscation of ideas.

Jason now feels comfortable navigating the sales cycle at companies like Takeda and says it’s critical to have an internal champion, like Mike, as early as possible in the sales process.

Mike agrees. He believes his role as champion for innovation and startup liaison was critical to Takeda developing a solution for KOL identification, and says that any company looking to emulate his success with rMark Bio needs a senior executive dedicated to innovation. Further, he credits Takeda’s leadership for providing the resources and vision to support innovation projects.

Mike and Jason’s successful collaboration is an example of exactly what we do at MATTER. Thanks to Jason’s MATTER membership, Takeda’s MATTER partnership, the Living Lab program, and Maryam’s warm introduction, Jason and Mike could work together and build something that neither could have done on his own.

Stories like Mike and Jason’s encourage the innovators here – both those working on their own startups and those within our healthcare industry partner organizations – that it is possible to break out of their individual silos and use innovation to accelerate the development of game- changing solutions that can move the industry forward.

Resources to help you navigate the COVID-19 pandemic

Healthcare innovation is more important than ever

Meet the newest additions to the MATTER community