Doctors are people too.

That basic concept has guided Sam Glassenberg as he’s taken his medical video game company, Level Ex, from a startup to a successful company that was recently acquired by digital medical technology company Brainlab.

“Doctors play games. They use the latest smartphones. They know what a good user interface looks like,” said Sam. “Yet, we find that healthcare companies market and present the same way, with the same shade of medical blue and some assumption that doctors will tolerate a terrible user interface or content that’s boring just because they’re doctors.”

With Level Ex, Sam has done the opposite. They use cutting-edge techniques from the video game industry to create games that help train doctors. They prioritize creating high-quality and engaging content made by a team of professionals in medicine, art and entertainment. Today, their games span cardiology, pulmonology, gastroenterology and anesthesiology, with more specialties on the way. 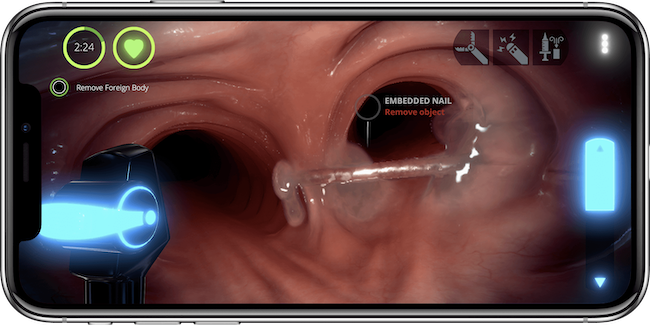 Since Level Ex was founded in 2015, they’ve raised $23 million in funding, been named to Fast Company’s Most Innovative list and have over 600,000 medical professionals playing their games. The company’s clients include six out of the top 10 pharmaceutical companies, global medical device companies and medical societies. They have even partnered with The Translational Research Institute for Space Health (TRISH) to help NASA create a virtual human simulation platform to train astronauts how to deal with medical situations in space. Last month, the startup announced that they were acquired by Brainlab and are now a wholly owned subsidiary of the Germany-based company.

“A major reason why neurosurgery has the reputation for being at the cutting edge of medicine is largely due to Brainlab,” said Sam. “This company fiercely applies technology to solve major problems in surgery and in healthcare. So our missions are very aligned, and they’re the ideal company to work with going forward.”

Founding a company — by accident

According to Sam, Level Ex began by accident. Raised in a family of physicians, Sam was the “black sheep” of his family as he pursued a career in the video games industry instead of attending medical school. In 2012, his father, an anesthesiologist, asked him to use his game development skills to make a game for medical professionals to practice fiberoptic intubations. Sam spent three weekends on it and uploaded it to the app store, so his father’s colleagues could easily download it. Later, when his father inquired how many people had downloaded it, he was stunned to see that 100,000 doctors, nurses, and airway specialists had played the game.

That’s when Sam knew he had enough physician demand to launch Level Ex.

Level Ex grows up with MATTER

Level Ex joined MATTER in 2015, when both companies were less than a year old. Back then, MATTER had a handful of startups and an idea to become an innovation hub for entrepreneurs and industry leaders in Chicago.

At the same time, Sam was in the early stages of creating a company from the idea his dad had inspired. Although he admitted he’s usually skeptical of incubators and accelerators, Sam said that in MATTER, he saw a place where Level Ex could grow.

“I’ve walked into so many incubator spaces that are trying to recreate what TV makes us think creating a startup looks like — there are bean bags and ping pong tables, and nobody has any actual experience,” said Sam. “With MATTER, it’s completely different…There are people there that are emergency room doctors three days a week, and two days a week are incubating an idea for a medical device or software solution.”

In 2016, MATTER was able to connect the medical video game startup to Pritzker Group, who became one of their seed round investors. In 2017, they won $50,000 through one of MATTER’s first healthcare challenges. 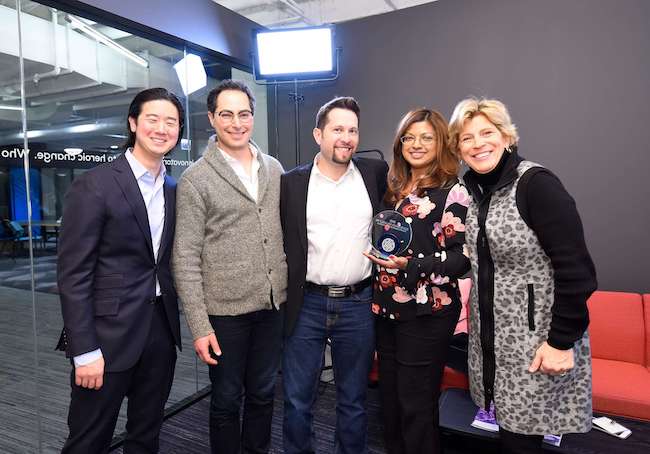 Sam Glassenberg and Genevieve Paquette, chief development officer at Level Ex, with MATTER after winning $50,000 at the IPF Innovation Challenge in 2017.

Shortly after raising their seed round, Level Ex moved out of MATTER’s shared space and into their own to support a quickly growing team. However, Sam and his startup have remained active members of the MATTER community — both to learn at events, and to share the lessons they’ve learned along the way. 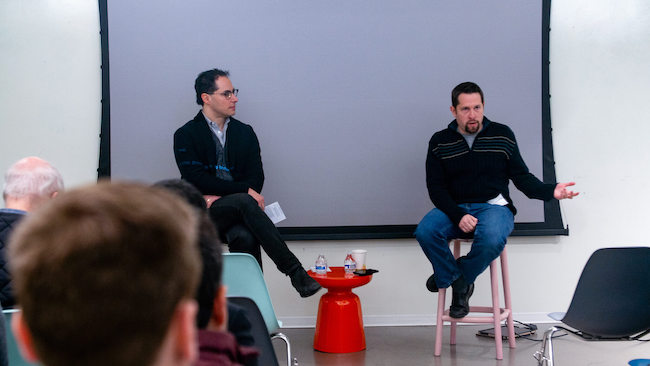 Sam leads a MATTER Founder’s Club event to share advice and lessons learned with fellow CEOs and founders from the MATTER community.

“I’ve loved working with Level Ex: The technology is amazing, the need is clear and Sam is a tenacious entrepreneur,” said MATTER CEO Steven Collens. “It’s been an honor to be a part of the journey from the proverbial one-man show to a 100+-person success story, and I’m delighted they will continue to operate and grow in Chicago under the Brainlab umbrella.”

While their growth in the last five years has been impressive, Sam is optimistic about what’s to come.