This major demographic shift is one of the reasons that Advocate Aurora Health, a MATTER partner and one of the largest not-for-profit hospital systems in the U.S., has committed to reimagining how they care for aging adults — inside and outside of clinical settings.

In a recent conversation at MATTER, Nicole Paulk, Advocate Aurora Health’s senior vice president for strategy and innovation, shared her own story of caring for an aging parent, and why finding novel solutions that address care coordination, social determinants of health and preventive care is crucial to a better future for the aging population.

When I speak to entrepreneurs in the aging space, I’m always struck. They’re smart, they’re talented, they’ve got great ideas — they could be doing almost anything. And when you hear why people got into healthcare, almost inevitably, it’s because they or someone they care about has had a personal experience that caused them to think to themselves, “We could do this better.”

And that’s part of the reason that we’re interested in the Health Tech Venture Challenge as well.

This is my dad: 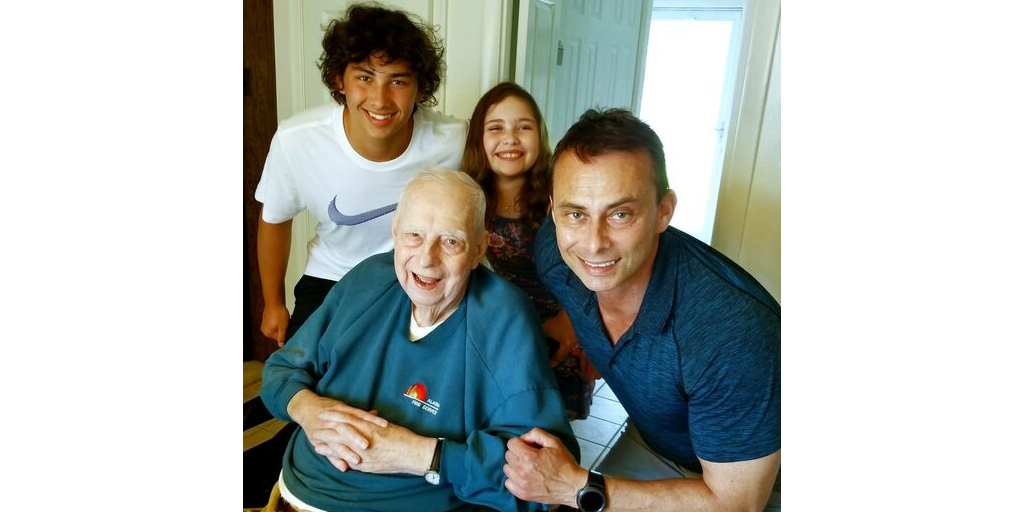 You also see my brother and his two kids. They’re actually visiting my father on Father’s Day this year in his house. My mom’s there too — she’s taking the picture. And it’s a pretty happy scene. They’re sitting around the kitchen table.

But if you had heard the story of what we have been through over the last year, it’s almost a miracle that this picture happened.

And it takes a lot more than the health system is currently constructed to provide.

My father is generally pretty healthy — cognitively, he’s 100 percent there. He’s got some chronic conditions, but they’re pretty well-managed. He’s 83 years old. He lives in the D.C. suburbs — I live in Chicago — so I don’t see him as often as I would like.

About a year and a half ago, he took a really bad fall, and he tore his patellar tendon and was no longer able to walk. So even at age 83, they felt that surgery was something they had to do.

So they went in. They operated. They reattached the tendon.

They did the surgery again.

They gave him a full cast…And I was wondering about the wisdom of doing that. But a couple of months later, I got a phone call from my mom:

“Your dad’s in the hospital. We’re not sure what it is. He’s got a really bad fever — we think it might be an infection.”

So I flew home as quickly as I could. And, in fact, he had a systemic MRSA infection in his bloodstream.

He’s very lucky to be alive. He did get good care on the inpatient side. He was there for a long time because there were other things that happened while he was there that they needed to stabilize, so he ended up in a nursing home with a PICC line.

After a while, he was physically okay. But he was not making any progress in terms of rehab. And he had sort of given up his will to live.

So one winter day, my mother and his caregiver broke him out of the nursing home — against medical orders — on an icy, snowy day in Virginia. (If you’ve ever been to D.C., you know people can’t drive there.) Somehow, they made it home and got him stabilized at home.

At that point, he had no system.

He had broken the bond with his primary care physician.

The nursing home refused to provide any referrals.

He had no home care.

He had no additional support other than this personal assistant we were fortunate to have.

I was lucky that I had worked for the largest health system in northern Virginia, so I was able to connect him to home care with prior contacts. I got him to a new primary care physician who specialized in geriatrics, we got him home physical therapy, and he made a tremendous amount of progress.

But that’s something that not everyone can do, and it probably wasn’t optimal for me to be doing it from across the country.

There are so many issues that this story illuminates that we could have done better in terms of providing support.

There are so many issues that this story illuminates that we could have done better in terms of providing support.

What I am talking about is just a microcosm of all the issues that we need to address to help people live well and to age at home. And that’s why we think it’s so important to be in this space.

The Health Tech Venture Challenge is currently seeking solutions that support aging adults who want to live safely, independently and comfortably in their own homes and communities. Applications for the Submissions are due Tuesday, September 24 at 5:00pm CT.

This year, we’re on a mission to tell the boots-on-the-ground stories of healthcare. Learn more about Stories That Matter here.

#storiesthatmatter: Building a community for youth affected by Huntington's disease

#storiesthatmatter: What do holidays look like for a food allergy family?

#storiesthatmatter: Honoring patient wishes at the end of life