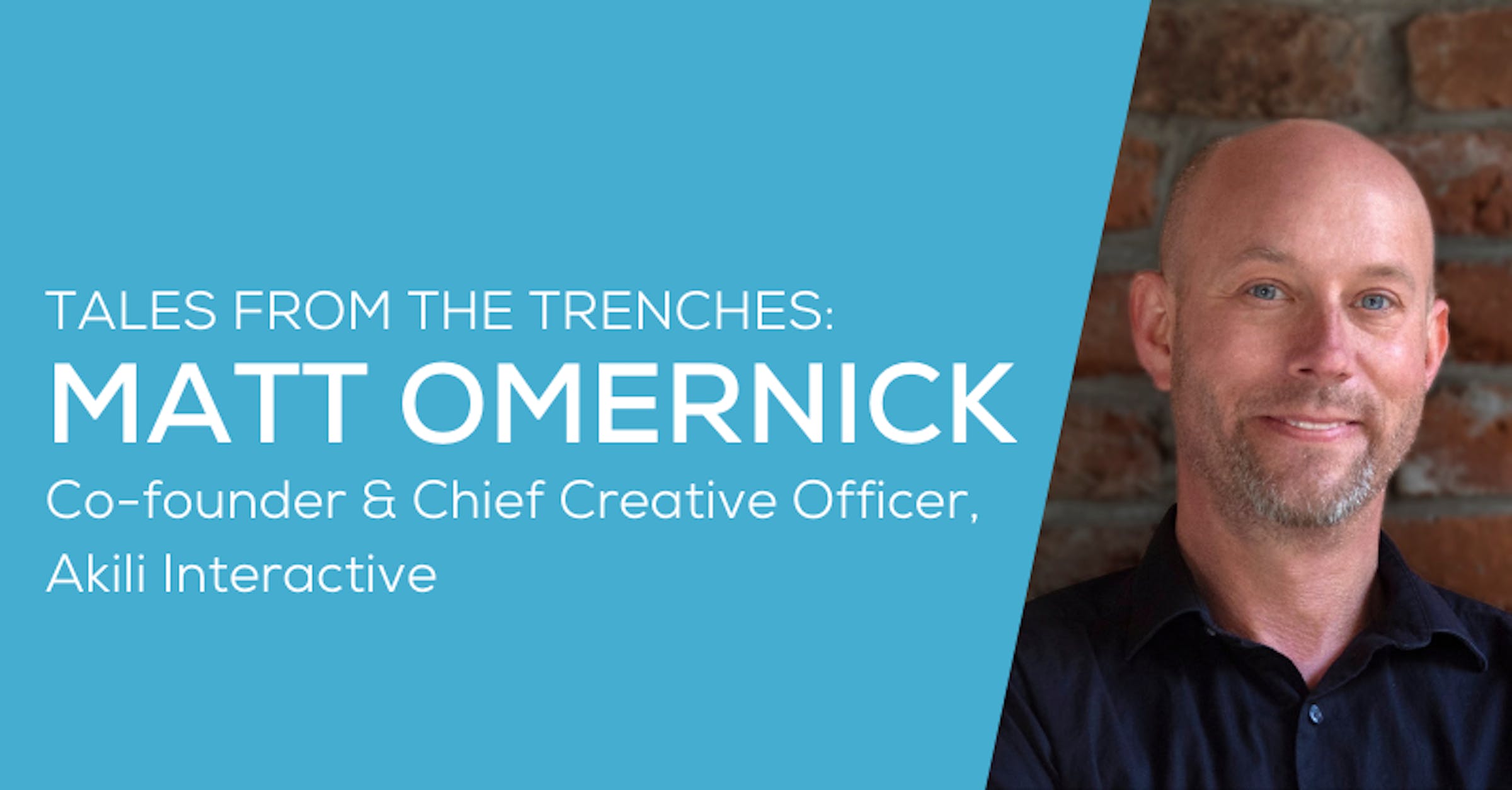 If there is an archetype of a typical healthcare entrepreneur, Matt Omernick is not it.

An artist and computer animator by trade, Matt spent 15 years in the games and entertainment industry before a chance social encounter would inspire the founding of Akili Interactive, a prescription digital medicine company that builds clinically-validated cognitive therapeutics that look and feel like video games.

Nearly a decade after Akili’s founding, Matt and his team saw their hard work pay off: This summer, Akili Interactive was awarded FDA clearance for EndeavorRx, the first-and-only prescription treatment delivered through a video game developed to treat children with ADHD.

In a conversation moderated by VillageMD Chief Technology Officer Mike Roberts, Matt discussed his non-linear career path, the building blocks he used when starting Akili and how he believes video games are changing the face of medicine.

Here are our key takeaways. Responses have been edited slightly for length and clarity.

A lifelong passion becomes a career

“I am lucky in the sense that I’ve always known what I wanted to do — I grew up knowing that I wanted to be an artist. Ever since I saw the music video Money For Nothing by Dire Straits, I wanted to learn computer animation. When it was time for me to go to college, there was only one school in the world that taught computer animation, Ringling College of Art and Design in Sarasota, Florida, so off I went.

“After a few years working for film and gaming companies in Chicago, I decided to move to the west coast and started working for startups focusing on gamification and tech. It was really, really exciting — I definitely got bit by the startup bug. Soon enough, I got an offer from Dreamworks Interactive to work on the franchise Medal of Honor, which established the intellectual property that led to Call of Duty.

“My time at Dreamworks was an unbelievable experience. It’s where I first branched out from being ‘just an artist’ to learning about game design in a much deeper way. At Dreamworks I got bit by another bug, which was solving really challenging, complex problems that haven’t been solved before. After Dreamworks, I went to work for LucasArts for a decade.

“The reason I preferred working in gaming more than in film was the complexity and myriad of unsolved problems in gaming.”

“The reason I preferred working in gaming more than in film was the complexity and myriad of unsolved problems in gaming. Filming is wonderful, but it’s passive. You can control every frame on the screen and you know exactly what the product is going to look like, whereas in a game, the product is three dimensional. There are so many variables that have to click together: It has to look good from every angle, it’s got to run on the processing speed that you’re limited to and so much more. From a problem solving and a creative challenge point of view, I was completely sold on the games industry once I got a taste of those hurdles.

“But, that comes at a cost. Anyone that knows anything about the gaming industry knows that it’s famous for crunch — the extra time required leading up to a launch. A lot of my time was spent in the studio during that part of my life, and I wouldn’t trade it for anything. But diving into that passion, following unsolved problems, you have to know that it oftentimes comes with a significant tradeoff.”

“Along with art, another interest of mine has always been the brain. There’s so much psychology in both art and in game design. I realized very quickly that really good game designers are similar to psychologists — they’re thinking about motivation — they’re deeply understanding reward, challenge, payoff and the balance between those things. Achieving the perfect balance of challenge and reward is the common denominator in all high quality games.

“I met one of our co-founders, Dr. Adam Gazzaley, an incredibly well respected neuroscientist, at a party in Berkeley, California and we immediately clicked. He was a major gamer, and I had this major interest in the brain. We started talking about how if designed as such, games can actually be very good for you. This idea that games aren’t totally evil resonated with me right away. I realized that I can use the powers of gaming to not only help remove the stigma that’s always bugged me about interactive entertainment, but actually use these superpowers for good and improve people’s lives.

“I realized that I can use the powers of gaming to not only help remove the stigma that’s always bugged me about interactive entertainment, but actually use these superpowers for good and improve people’s lives.”

“I started working nights and weekends at UCSF with Dr. Gazzaley while I was still at LucasArts, bringing some incredible colleagues with me. Dr. Gazzaley fed us beer and sushi, and together we built the very first early prototype of what eventually became the technology that founded our ADHD product at Akili Interactive.

“Our first study, which ended up landing on the cover of Nature, showed two things: First, it showed that a video game could be sensitive enough to detect the differences and the cognitive ability between individuals. It could essentially assess people to a really fine degree. Second, it showed that games could actually train the brain and improve cognitive ability. At this point, it was perfectly clear to me that I was in the right place — we had a technology that was completely new and, most importantly, could actually help patients. I never looked back.”

“The first step for us was to build a great core team of 10-15 people — we had scientists, data analysts, experts in healthcare, biotech, pharma, game design, film design, production and more, resulting in this cool, diverse group of people from all of these different industries. We recognized we had to build a culture and to do so, we had to understand each other’s silos and each other’s worlds as deeply as possible.”

“After we had the foundation of a solid team with diverse experiences and an understanding of one another, we had to decide who we wanted to help first. One of the strangest things about how Akili started is that the original technology we developed is actually core to many different disease populations. The technology changes the neural network of the brain, so unlike a drug that may mask the symptom for ADHD or depression, our technology actually changes the neural network on the brain, and therefore spans many different populations and disease states.”

“In the early days, we identified two critical pillars that we had to do right.

“The first pillar was scientific validation rigor. We knew that everything that we were doing needed to be irrefutably valid. This is real medicine, and we did not want our work to be confused with less scientific work.

“The second pillar was the quality of the experience — the engagement and the fun factor our product provided. Experience creates lasting change in the brain, and one of the best ways to create customized, personalized, potent experiences is through video games.”

“Experience creates lasting change in the brain, and one of the best ways to create customized, personalized, potent experiences is through video games.”

Prioritizing diversity of thought and experience

“When you’re setting out to reach a goal that hasn’t been achieved before, the worst thing that you could do is apply an old solution. You have to be really open minded and really creative. Whether you’re an artist or a scientist, creativity is the same thing. You have to surround yourself with people who think out-of-the-box and are comfortable being uncomfortable.

“Whether you’re an artist or a scientist, creativity is the same thing. You have to surround yourself with people who think out-of-the-box and are comfortable being uncomfortable.”

“When we founded Akili and found ourselves combining these two extremely different industries, diversity was one of the very first things that we both recognized and embraced. With that came great power and great challenge, as we’ve got people that think completely differently and come from different worlds. I’m thankful that we recognized that early and leaned into it, leading us to invest in and enhance our diversity of thought rather than combating it. So far, it has worked for us.”

Finding your passion and following your gut

“I feel very fortunate to have known what I was passionate about and to be alive during the time where the thing that I’m passionate about exists, because that’s not always the case. Passion has been a huge part of who I am and the choices I’ve made throughout my career. For me, it’s paid off more often than not, so much so that now my natural instinct to just follow my passion. You can say it a million different ways: follow your gut, follow your heart, follow your passion, but it’s all the same idea.

“I like to think that passion starts as this giant collection of data that you’re gathering of all of your experiences — you don’t really know what you’re gathering, but somewhere along the way it starts to manifest as a gut feeling. I tell my young kids all of the time that you can do anything you put your mind to, but pick something that you love.”

Insights from Corvidia Therapeutics' Michael Davidson at Tales from the Trenches